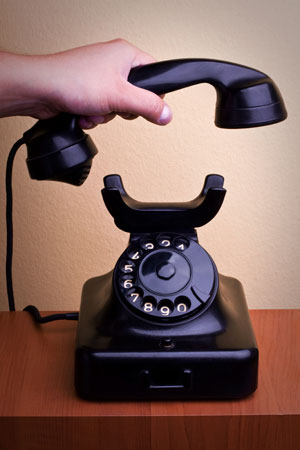 Get The Word Out

By: Ken C. | North Carolina
A service-loving member has a unique plan to reach out the hand of AA

“AA Intergroup, this is Kenneth, how may I help you?”

“What are you talking about, man?” I said to the caller. “This is AA. It’s free if you want it. I’m a volunteer answering the phone. I don’t want your money!”

“Well I just called your 800 number and they told me I had to make a $500 down payment and get an assessment at your center in Florida!”

“I don’t know who you called buddy, but it was not Alcoholics Anonymous!”

We both calmed down and finally figured out that there was a problem with the local phone book. This guy was trying to get hold of AA, but ran into three columns of profit seeking businesses using lots of A’s in their name to get to the front of the telephone directory. People seem so desperate to get their business noticed that they will distort spelling with egregious use of the letter “A” even going so far as to offer to help with “alcohaaaal” problems.

When someone finally decides they want to call AA to help them get sober, we shouldn’t be hard to find. That phone call opened my eyes to how important it is to keep a contact number out and visible in the community. At our intergroup office one only needs 90 days to be a phone volunteer. I was fortunate that on the same night that I picked up my 90-day chip I ended up being assigned to our group’s monthly phone commitment the following Sunday, though at the time I didn’t appreciate it. I have been involved in service work ever since, because it is a joy. Also, I know from being Twelfth Stepped myself through the Intergroup how wonderful it is that there is a local place to call and get help. Also I have found that if you just keep showing up and don’t say no, people in AA will put you to work – which is a blessing. I soon found myself sponsored into going to prison meetings, elected GSR of my home group, and helping with public information by taking AA literature around to public places and refilling racks at the library in addition to answering phones to help keep our Intergroup office number answered by a real person 24/7.

At a district meeting in the spring of ’04, I noticed a big cardboard box in the middle of the floor as the meeting got underway. In it was a literature rack, a few pamphlets, and a letter of resignation from the CPC/PI officer of the group—the one responsible for Cooperation with the Professional Community and Public Information, which are combined in this area. In his letter he suggested that I take the job. I didn’t refuse, so I got the position.

From that beginning I developed a fairly extensive route of good places to leave the literature and was always looking for ways to expand the reach of AA. One hot summer day, as I was driving through choking traffic in Wilmington, N.C., the tourist town I call home, making my way from the Community College to the Salvation Army to drop off pamphlets and meeting lists, I was trying to think of what more I could do to carry the message with this position that had fallen in my lap. It occurred to me that there are scores of hotels and motels in town and at all the area beaches that would be great places to have information on AA. Then an idea struck: There are just too many places to try to keep them stocked with meeting lists. They have to be updated every two months. What is needed is a little sign that could be left in place once and for all with the Intergroup phone number and website on it.

Right then and there I began designing the sign in my head. I figured it should have the circle and triangle as the most prominent feature, as this would catch the eye of anyone familiar with the fellowship, and then the contact information. These signs were intended to reach AAs visiting the area looking for a local meeting. They might even catch some drunk who has snuck off to hide the misery of falling off the wagon. Even then, in a moment of clarity, a phone call might no longer seem too much for them. All they would need is the number. The best way to get current AA information around here is to call Intergroup.

The area covered by the Wilmington Area Intergroup covers three counties and is divided into two districts—04, which is mine, and 03. The dividing line goes right through the middle of the city. In years past the two districts had jointly worked to place signs in city buses that read:

“If you want to drink, that’s your business. If you want to quit, that’s our business,” followed by the intergroup phone number. I thought that a perfect model, to have the two districts jointly work on public information projects.

I looked into the possibility and found it would be $20 to make one sign, but 100 signs would bring the price down to six bucks each. My district voted to buy 60, and the other district in town stepped up to get the other 40. Of course once the signs were made I had to get them distributed. I put on my one and only suit and tie, got a hair cut, and went to every hotel/motel down the main drag in one day.

I would speak politely to the desk clerk and ask to see the general manager. Almost all agreed to display a sign. One woman overheard me talking to the clerk and began shouting, “We don’t need any AA signs cluttering up our office!” But several others enthusiastically told me stories about family members and loved ones whose lives they believed had been saved by AA. Those warm receptions really made my day. Thus I personally placed a good 20 signs, and volunteers recruited though announcements at meetings went to spread them all over the district. In keeping with the Ninth Tradition, it was not a tightly organized effort, so I am sometimes pleasantly surprised when I see a sign in an unexpected place like my barbershop or the Office Depot near my apartment. I have also had the joy of sharing this idea at area events where it has been well received. Jimbo S., who is the CPC/PI chair for 03 has taken the idea and run with it. He has already reordered signs for his district and has recruited teams to distribute them. I hope that my district will soon need to do the same.

My latest brainstorm is to get the signs into liquor stores. This isn’t as crazy as it sounds. In my state, there is an alcohol control board running liquor stores who are charged not only to sell the stuff and collect the tax revenue, but also to control consumption. I believe a case can be made that having the AA signs in the store would be very appropriate because while most drinkers are responsible, the state has an interest in limiting sales to those of us who become social problems when under the influence. And what better place could there be?

Wilmington is an area of tourist towns, beautiful beaches, a historic downtown, a growing film industry, and a large State Port—all of which brings visitors and attracts people to move here in droves. We love getting visitors and new people at our meetings, and I hope in the future we will not hear that meetings were almost impossible to find, lost in the phone book somewhere between “AA Detective Agency” and “AA Flirtatious Girls.”