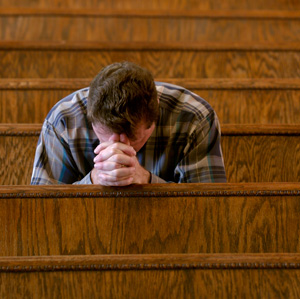 God Never Gave Up on Me

By: Tom D.
A member tells how he found his way back to the religion of his childhood

Recently someone asked me if I believed in God. I smiled and said, “certainly,” however, it was not always so.

I was born into a Roman Catholic family and attended parochial grammar and high school and a year and a half of a Catholic college. When I was old enough, I became an altar boy and had to master the Latin for the different types of masses that were celebrated at that time. In those days, there was also a great deal of majesty, pomp and mystery surrounding the mechanizations of the Catholic church. I don’t know if I was born an alcoholic or became one—nature vs. nurture. I do recall that at a very early age I experienced a great deal of mental anguish and convoluted thinking regarding my church, my God and how they fit into my life.

At an early age, having misinterpreted many of the teachings and beliefs of my church, when I became an alcoholic, I became very vocal in my criticism of my faith and stopped attending church. When I became a parent during my second marriage (my first marriage did not last as long as one of my hangovers), I resisted having my two youngest children baptized in my church because of my attitude and my anger towards God. At the age of 33, facing a second divorce and several years of imprisonment for a crime that I committed in a blackout, I was given one last chance by a district court judge in Westfield, Mass. Actually he said, “Thomas, counseling or jail!” I must have had a moment of divinely inspired clarity and said, “Counseling sounds OK.” Often you hear people say “that only an alcoholic can help another alcoholic,” but my alcohol counselor was a non-alcoholic who was a very kind and wise man. After several weeks of counseling and repeated failure on my part not to drink, my counselor directed me to start attending Alcoholic Anonymous meetings.

The men who took me to my first AA meeting and the people that I meet at that meeting treated me with kindness, gentleness and love. AA was all new to me! I had no idea what I was getting myself into but I identified with something that the second speaker said that night.

The second speaker said almost verbatim something that I said in the car on the way to the meeting. The guy who brought me looked at me and said there is someone just like you. The similar statement was nothing profound, insightful or deep but it was the first time in many years that I identified with another human being. In my mind I had become unique, different than other people and completely isolated from my fellow man and my God. At the end of this meeting we all rose to say the Lord’s Prayer. Because I had no need for prayer for so many years, a prayer that I used to be able to recite in Latin, I could not remember the words in English. After my sponsor dropped me off at my house in Blandford, I did the smartest thing that I have ever done in my life. I opened up the refrigerator and threw out the nine cans of beer that I was saving for my after-the-AA-meeting celebration. I then sat on my mattress, which was on the living room floor in front of the TV set in a house with frozen heating pipes, and cried as I tried to remember a prayer from my youth. I then laid down and fell asleep.

Over the years when I am asked to identify some of the things that I value about my sobriety, I respond that I can sleep at night. Only other alcoholics understand this because, when actively participating in their addiction, one either passes out or crashes from exhaustion. I have been continuously sober since my first AA meeting and have enjoyed every single-sleep filled night since that time.

I was 33 years old when I became sober. I had no belief in the goodness of my fellow man, the sanctity and genuineness of any church or the existence of any God. I had given up on the existence of God and I am so happy today that my God never gave up on me. When I was sober about three months, one of my AA friends (sponsor) suggested that I go on a retreat with him and other men who were sober in AA. I had attended retreats at this monastery while in high school. I agreed to go, not for any religious experience, but to be with my new sober friends. I am so grateful that my mother lived long enough to see me sober and I thought that she would be proud of me for going on a retreat. I called her to tell her the good news. She was very happy for me and immediately suggested that I look up a Father Gregory and talk to him during the retreat. My mother made this suggestion several times during our conversation and I agreed with her each time, knowing that the last thing that I was going to do was look for a priest to talk to about my life, faith in God and my former religion.

I arrived at the monastery a couple of hours early for the start of the retreat. When I walked into the main lobby of the retreat house there was an old janitor sweeping the floor. I announced to the janitor that I was here for the men’s sober retreat, and he told me even though I was early he would help me to register and to find my room. I said to him my name is Tom. He shook my hand and said, “Hi! I am Father Gregory.” The man that I wanted to avoid was the first man that I met that weekend. Father Gregory had at that time been a priest for 48 years and was one of the most genuinely humble and spiritual people that I shall ever meet. I spent hours that weekend talking with him about my lack of faith and also, now that I was sober, how I was starting to become aware of just how much damage I had done to others and that I felt I could never be forgiven for.

He assured me then and during the many other retreats that I attended there in the early years of my sobriety that God had forgiven me and my sins. He also told me that those people who I had hurt but for whom it was no longer possible to make amends to, one of the ways that I could do that was by doing volunteer work.

I left the retreat house on that Sunday afternoon filled with a newfound belief in my God, my religion, and the goodness of mankind. I guess while driving back home to Westfield I was so preoccupied with my heavenly thoughts that I was driving below the speed limit. Several cars blew their horns at me, and a few, as they sped around me, presented me with the Ted Williams salute. These altercations were similar to throwing cold water on a sleeping person. All of my newfound beliefs vanished—well, not all of them. I was to find out that faith without works is dead. Works, I came to understand, was being a keeper of my church’s rituals, the simplest one being attendance at weekly mass. I had to change years of laziness and get up on Sunday mornings. So I became a ritualistic Catholic while still harboring the same questions about my religion that I had from both my past and present.

So many people have helped me to overcome these erroneous and faith-blocking beliefs. People have been placed in my life at times when I would be receptive to their message. I call these meetings “Providential Godincidences.” One night a particular speaker was talking about his anger towards hypocritical religious persons. He related how that this anger was lifted when he gained the insight that his problem was not with God’s message but with God’s messengers. This insight allowed him to more fully love his God and to pray for the hypocritical messengers. I thought if I would focus on God’s message and not his messengers my life, my faith would become more serene and fulfilling—and it did!

Another recurring faith-blocking thought was if there really was a God who was truly loving and caring, why are there so many violent tragedies that are fostered upon God loving people and families? In the late fall of 1987, in Townsend, Mass., a husband and father came home from work one evening to find his family, his wife and children, murdered in a horribly brutal manner. This was exactly the kind of tragedy that would feed my still lingering disbelief in a loving God. It was discovered that the murderer was a young male neighbor that the family had befriended over the years. At the funeral mass, the distraught husband and father made this statement, “This was not God’s work but the work of a very sick individual.” What an incredibly true statement! I had been blaming God all of my life for man’s behavior.

Although all of the barriers that existed regarding my God and my religion have been reduced, I hope and pray that my God gives me the insight and ability to never stop learning. Recently a friend of mine lost his wife to a long-term illness, being able to watch his faith sustain him through his loss and resulting lifestyle change was truly rewarding and inspiring. About a month after his loss, I asked him how he was doing. He told me that he prayed for his wife and his stepchildren every day. I asked him how his relationship was with his stepchildren. He replied that it was getting better because of prayer.

When I asked him to explain what he meant by that remark, he told me that he believes that “prayer softens the heart and heals the memory.”

When I have experiences like this I know I have a lot to learn but at least now I know that I am never alone, for my God is with me as he has always been.