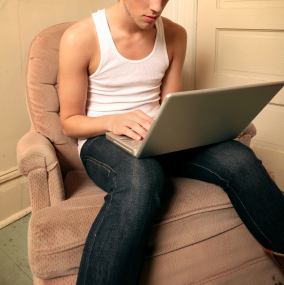 By: Paul L. | New Brunswick, New Jersey
With some time, drink signals can be shut down like pop-up windows.

Sometimes when working on the computer, an intrusive little window pops up saying things like “An update is available. Would you like to download it now?” or “There are unused icons on your desktop. Would you like to open the desktop manager?” And almost all the time I click the little “x” on the popup window to close it without answering or worrying about the question.

That is what the desire to drink is sometimes like. From time to time the thought pops into my head, “What about a drink?” And I don’t even answer it. I already know that the answer is no. I just go on to the next right thing and let the question close itself. My first 90 days the question popped up quite frequently and it took some thought and effort to close the question and go on. Sometimes it took a call to my sponsor or an AA friend. Once it took going to the meeting book and finding the soonest meeting anywhere.

After 90 in 90 the question popped up less frequently. And after my first year, the move to ignore the question, to go right past it to the next right thing became habitual, but not automatic.

There is a difference between those pop-up windows on the computer and the idea of a drink though. The pop-up windows are a product of software, of the programming of the computer. They aren’t built into its hardware, its chips, its circuits, its transistors. Someone who is good enough at working with software can find the program that makes them pop up and remove it.

But when I drank enough to become an alcoholic, I hard-wired the idea of a drink into my mind. Something changed in my body chemistry (I am sure the doctors who study addiction know what by now, even if I don’t) and it isn’t going to change back. This means that that window, that idea of a drink, is going to keep popping up in my mind, from time to time. Hopefully it will happen less often as the years go by. But it will never go entirely away and I will always have to close it by hand, by deliberate effort of mind and will.
That’s the nature of the beast.