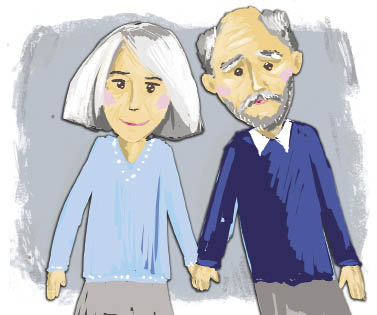 With the help of AA, a Navy man gets sober and begins to right wrongs with his family

My family was pretty normal until my dad died. I was 7 years old at the time, and my three sisters took up what little time my mom’s work left her. With no dad and four females in the house, I became an instant introvert, terminally shy. School was hell until I took my first drink. Then my world changed. I could talk to girls, dance and be like the rest of the world—but only when I was drinking.

I drifted through life. I had OK grades and could have gone to college if we’d had any money. Navy recruiters came to school and told us the Navy had the best schooling. I swallowed the hook. I really didn’t have any idea what else to do with my life. I did OK in the Navy when I wasn’t getting in trouble for drinking, but I was a pretty lonely sailor.

After I was in for about a year, I met my wife. We married and had a little girl. I got out of the Navy, found a job, and we had another girl. My new job was almost perfect: nearly everyone drank. And I deserved a drink after work! (What a big lie—I never had just one drink.)

My drinking became a bitter issue at home, but I continued to do it. Eventually, I got to that point where I had to get help. So I went to the counselors, and I went to AA meetings, but I thought it all was a bunch of BS. So I kept drinking, knowing I was an alcoholic. After nine more months, I woke up from a blackout and surrendered—utterly and completely—to God and to the fact that I could not drink safely.

When I sobered up, I realized I was married to someone I barely knew and had actually hated for quite a while. I also barely knew my two little children, who were now 12 and 5. My wife and I tried to get back together and, of course, we had a new baby immediately. It really wasn’t working between us. But the one thing that did work was my AA meetings.

After a while I started to actually hear what was said at meetings, and it scared me to death. I was told to take it easy, to work the Steps in order, and to live in today’s problems. I didn’t go out and start making amends right away, but I did start to think about what I was going to have to do—and I was overwhelmed! My sponsor told me to wait and we would get through it with God’s help.

After a while I made my Ninth Step list. I gave people money, things, time, what I owed them and what they deserved. But what about what I had taken from my wife and my children? What had I done to them? Exactly what did I owe them? How could I possibly make amends? I once felt I hated my wife. She and I had been together for 17 years, and for the last 10 years we probably hadn’t said 17 civil words to each other. My feelings cried out for divorce, a new start, a better life. But I was now developing a conscience. So I made a decision, a commitment; she needed a lot more than an apology. She had stuck by me for 17 years as a drunk; I owed her 17 years sober. That was the least that I owed her. I may not have liked her, but I owed her civility, tolerance, kindness, generosity and forgiveness. All the things a true husband should have been giving all along. And oh, by the way, too bad if she didn’t reciprocate!

Now how do you explain to 12 and 5-year-old girls that you are an alcoholic? I still can’t think of a way to do that other than saying, “I’m sorry, and I won’t be that way anymore.” But I knew I owed them much more than just words: I owed them a commitment. So I kissed them and tucked them in every night for years. I gave them my time. I was nice to their friends when they came by. I let them help me with my projects around the house. I gave them my love and myself.

And how did all this work out? Well, one day when I was about 15 years sober—I don’t remember what we were doing at the time—my wife leaned over to me and said, “You’re a nice guy.” I will never forget that moment. It was the first time it had ever happened. More recently, with both of us having 20-plus years of sobriety, we celebrated our 42nd wedding anniversary. My three children are doing well. I have three grandchildren. It’s been rocky at times, but when I treat everyone with love and tolerance, and remember to keep my mouth shut and my side of the street clean, everything seems to work out.