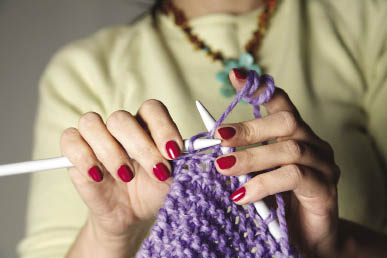 One stitch at a time

How often are newcomers told to do “90 in 90”? In my almost 30 years of uninterrupted sobriety, I had heard the suggestion frequently, but had never done it myself.

Then one morning I woke up thinking, Wow, I’m only three months away from having 30 years sober. Hot on the heels of that revelation, I realized: Three months equals 90 days. I could do 90 in 90 now!

I decided to tackle this project as a spiritual discipline, and it has brought myriad spiritual gifts. What have I learned? Has it changed
my perspective? How does recovering 30 years ago compare with recovery now?

Within the first few days, I felt as though a comforting mist had settled in on my world. (Perhaps only those of us from the Pacific Northwest can appreciate how a mist can be comforting.) I found a new respect for newcomers who actually do 90 in 90. At first, to be perfectly honest, I thought making time for all those meetings would be a doggoned pain in my derriere. After all, 30 years of sobriety has given me much life to be lived. Well, la dee da and whoop de doo! However, two or three weeks into the marathon, I found my stride. Going to meetings seven times a week started to feel as natural as eating and sleeping.

Did I say seven times a week? Well for me, 90 in 90 did not always mean a meeting each day for 90 days. I was sober enough not to set myself up for that probable failure. So I doubled up some days. Also, I did want to stay married.

So what’s different now from when I first got sober? I stumbled through the doors of AA in Falls Church, Virginia in the 1980s. I was told to concentrate on Step One for the first year. I could expose myself to the other Steps, but the most important thing was to stay sober. While I did Steps Four and Five at 11 months, study groups with printed workbooks were not yet popular, at least not in Falls Church.

Back then, insurance companies were routinely paying for 28-day treatment programs. The 10- or three-day spin-dry treatment programs came later. The air in meeting rooms was blue with cigarette smoke. Most evening meetings started at 8:30. I asked my sponsor why that was the case. She said only, “Think about it.” That same woman’s guidance for Steps Six and Seven came when she lovingly told me, as I whined about my low grades when I returned to school, “Dare to be average.” Gulp!

Tradition study meetings were an integral part of group offerings. Seventh Tradition self-support was practiced rigorously: No fund-raisers, no raffles “lest problems of money, property and prestige divert us from our primary purpose.” An exception was made for raffles for Conference-approved literature, which got a little money into the treasury, and better yet, got Conference-approved literature into circulation. We stressed principles above personalities: ask not “Who?” but rather “What?”

So what I have learned over the years? Limited space precludes listing everything, but here are a few nuggets:

• To postpone working the Steps is to postpone spiritual growth.

• To be judgmental about raffles is to discount the value of involvement in service that helps people stay sober (I still see the potential “land mines,” though).

• To feel lonely and isolated after a 3,000-mile relocation upon reaching 23 years of sobriety is occasion to remember the words of an early sponsor: “If God seems far away, take a look at who moved.” It did me little good to skitter around, sampling meetings hither and yon. Instead, feeling “a part of” came back when I attended fewer groups but went to those often and regularly.

• Finally, to do 90 in 90 when approaching 30 years is to hear, “If you want what you had, do what you did.” It is to humble oneself and admit to loneliness, then be ready for the healing warmth from other members who had no idea you felt that way.

And my 90 in 90 project? My profound conclusion is this: A 90 in 90 isn’t just for newcomers. While it took 30 years for me to try it, I hope other long-timers will consider doing this for themselves too.