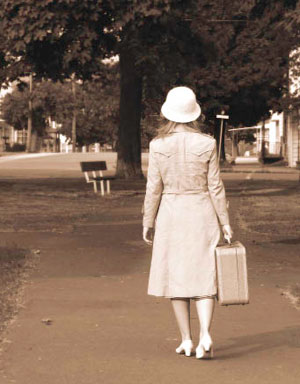 From Saloon to Salon

Getting sober was tough for a woman in 1949. But she had a knack for fixing hair

One night when I was drinking, police stopped me on the interstate bridge going from Marinette, Wisconsin, to Menominee, Michigan. “You were driving pretty erratically,” the officer said. “My goodness!” I replied. “That’s terrible!” He asked me where I was going and I said I didn’t know. “Where are you coming from?” he asked. I didn’t know that either. The officer said that he knew me and that he would see that I got home. I called him a party pooper. The next day I felt humiliated, so dirty and so awful. I hated being alcoholic. And I hated being a woman alcoholic.

One time my husband and I got into a terrible fight. He hit me and gave me a black eye. I had called him a terrible name, so I blamed myself. But I still hated any man who would beat on a woman. As of that moment, my feelings for him were gone. No love. No respect. It was all gone that day. But I stayed in that loveless marriage anyway and blamed myself for everything that went wrong.

My husband was a member of the local Elks club. We partied there a lot. They always had snacks but I never wanted any, as it took away the glow of the booze. I’d get drunk and send my husband home without me. He had to go to work the next day. I’d get a ride home with some other guy. I was a flirt. The next day, my husband would tell me that I made a fool of myself. I knew it. I didn’t need to have somebody point it out to me.

One night at the club we had a big fight. It was one in the morning and I could not get a ride home, so I started walking. We only lived three blocks from the club. I kept falling down on the cement, scraping my knees. I really hurt myself. My hands and knees were bleeding. I remember kneeling on the road and crying. Somehow I got home.

The next morning I had a dirty rotten hangover and a bad case of the shakes. I couldn’t believe that I had lowered myself to that level. I felt such guilt and disgust. I had enough shame to last me a lifetime. I loved to drink, but it wasn’t fun anymore. I was now paying the consequences. I was no longer a lady; I was a drunk.

I picked up the phone and called my priest. I hadn’t gone to church for a long time because I was so ashamed. I told him that I thought I had a drinking problem. He said not to worry about church for now. He told me to go to AA and get my life straightened out. He put me in touch with a guy named Ben who had been sober for over a year in AA. I could hardly believe that anyone could be sober so long. I was impressed.

I don’t remember much of what Ben said, as I had the shakes. But I do remember he told me that I never had to drink again. Then I started thinking I wasn’t sure I was that bad. Wow, the lies we tell ourselves.

A few years earlier, I had seen the article by Jack Alexander on AA in the 1941 Saturday Evening Post. I am sober today because of that article. It was the first I ever heard about AA. I didn’t quit drinking then, but I thought about that article a lot.

Ben was my sponsor and we met practically every day. He told me we could not get sober for someone else. But I had a 4-year-old son and I wanted to be sober for him. Otherwise I couldn’t be anything to him.

Ben had gotten his AA from Green Bay. Marinette and Menominee are small towns. At that time, AA there consisted of one other man besides my sponsor and myself. But soon there were six of us. We met at each others’ homes. Our group began to grow. We had to find bigger places to meet, such as church basements. A man named Oscar played a big part in building a clubhouse for us to meet in in Menominee. It’s still in use today.

It wasn’t easy being a woman in AA back then. But soon another woman arrived. Her name was Millie. She and her husband were nice and seemed to have a successful story; they got sober and got their children back. Millie became my sponsor, as it was thought that men should sponsor men and women should sponsor women, which is still the suggested arrangement.

Ben was very big into AA. He dove in hook, line and sinker. Early on there were no hospitals or places to get sobered up. I got into service. I was the group secretary. Someone else was treasurer. I became a sponsor right away. My first sponsee was a rough character. She was in and out and drinking. I was on the phone all the time. I was gone from home a lot doing AA work with fellow alcoholics. If somebody needed us, we would up and go. I spoke at meetings when asked to. And we would get speakers from Milwaukee and Chicago. Everyone who came to AA here got a Big Book whether they could afford it or not.

My marriage was not good. I knew I had to do something to take care of myself. I knew that I had a knack for fixing hair. I saw hairdressing as a way to improve myself personally and financially. So I enrolled in a beauty school in Milwaukee. My mom took care of my little boy and my husband.

I stayed with my sister in Milwaukee. AA was well-established there. I went to AA meetings. I knew I had to stay sober no matter what. That was the main thing. I waited on tables to put myself through school. It took a year. I got my state license. I went from the saloon to the salon. I came home determined to make my marriage last. I stuck it out for 10 more years.

Finally, my marriage was slowly crumbling. My husband and I did not have feelings for each other; we were not attracted to each other. My husband blamed AA for our divorce. He did not believe that I was alcoholic. He did not believe that alcoholism is a disease. He thought it was a moral problem. My life became consumed with AA and being with AA people. He was consumed with sports.

When I finally wanted out, he didn’t fight to keep me. My son hates AA to this day because he thinks AA took me away from him and his father. We all have personal heartaches. As the Serenity Prayer says, change what you can and leave the rest to God.

After the divorce, I married a man in AA. We were together for 19 years, during which he went out and drank. It was very hard on me. I loved him very much. He had also been sick four times with cancer. We divorced. It was painful but we were friends when he died.

I’ve had many experiences in AA over the years. One time I went on a Twelfth-Step call to a woman when I was only one month sober. I went alone. The woman’s father met me at the door with a butcher knife and yelled at me to leave her alone. Two people should always go on such a call.

And with sponsorship, the most important thing is to stay in touch, to be in contact all the time. At 98, I still sponsor women.

Up until recently, I was taking meetings to women in jails. I love jail meetings. Sometimes I’d come away from these meetings feeling very, very sad. Most woman inmates just don’t get it. Alcoholism is not only cunning, baffling and powerful, it is also deadly.

Last fall, I was in a terrible car accident. I almost died. I prayed to God that I’d live. The groups of mine in Marinette and Menominee are the most marvelous in the world. They brought me all kinds of food. They brought me meetings. I can’t say enough for my home group.

I’ve been married and divorced twice. I’ve had cancer twice. I’m the last living member of my family. No brothers or sisters left. But the family that has meant the most to me is my AA family. I never thought that anything was so bad that I had to drink over it. With this program we begin to accept God’s will and be secure in the thought that when our time comes, we will go with dignity. If we keep our AA program as our priority, we will die sober.

If you don’t put AA first and foremost in your life—before TV, before the ball games, before the Packers games—you can lose it all. It’s happened within my own circle of AA friends. Today my life is pretty joyful. All the Promises have come true for me, and then some.

Recently I heard a woman speaker, and one of the things she said that I liked was, “I came here to save
my butt. I’m not interested in saving my soul.”

But mostly, Alcoholics Anonymous gave me back my God—a God that I could understand. I start out every day greeting him. I end the day thanking him for all that is good. I also talk to him throughout the day. Any accolades I get, I give to God.