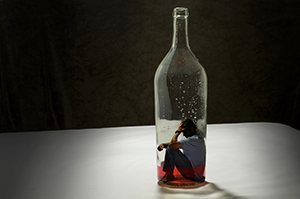 He escaped a troubled childhood by joining the army. But he couldn’t escape the bottle

I was so drunk I could hardly stand up. I was at a bar. With a microphone in hand, I sang Kris Kristofferson’s Why Me with all my heart and soul. Then I staggered home, grabbed my Bible, and with tears falling on the pages, cried myself to sleep. This is what my 17-year drinking career wound up looking like. I didn’t know it at the time, but I was soon to start a journey of discovery and renewal that still leaves me surprised and amazed.

Although I do not blame my family for my alcoholism, they definitely contributed to my disease. Right from the start, I was force-fed the idea that I was special, which is not a good thing to tell a child. My family was emotionally immature but it also was full of love. In the chaotic drunkfest that was my childhood, there was plenty of laughing and crying and screaming and yelling. Through it all, God was never mentioned. If it were not for someone teaching me to say a bedtime prayer, I would not have had any contact with God. Today I realize that, though I never felt God’s presence, he was always there protecting me.

I remember being at a friend’s house when I was 11. The whole family sat at the dinner table, and they said a blessing. They talked about things that happened to them that day. It made my skin crawl. I felt uncomfortable around families where no one drank and they all dressed nice and they didn’t slur words or cuss. I was way out of my comfort zone. Their homes had fresh paint on the walls with no holes in them. They seemed more civilized, blessed. I figured that God did not listen to families like mine who cussed and drank and fought.

Though my parents drank, they always loved me the best they knew how. There was craziness in our home. I remember when I was about 8, I asked my mother to stay home with me and watch TV instead of going out. She threw $11 at me and said she was going to the bar. My parents stayed out late and I would stay awake until they got home; then I would pretend I was sleeping when they came through the door. The good nights were the ones when they went straight to bed.

My mother was admitted to a mental hospital many times. She would come home with those paper slippers and a bag of pills. She also suffered from depression.

One night, while my dad was in prison, she brought two strange men home from the bar. The men got drunk and mean. I heard my mom say, “Just leave my boy alone, please. Take me, you can do anything you want to me, just leave my boy alone.” It took seven years of sobriety and a lot of counseling for me to begin to deal with that.

After my parents divorced, my father remarried and my biological mother moved to Marysville, California. My father’s new wife was—and is—a crazy alcoholic whom I admire and try to love unconditionally because she made sacrifices to provide for me. She is the toughest woman I know.

When I was a senior in high school, I had a car and some pretty good friends. I got a job at a department store. One day at work, the store manager said my father was there to pick me up. I’ll never forget my dad’s face. He didn’t say a word. My mind raced all the way home. When we got back to the house, my stepmom handed me the phone; it was my grandmother calling from California.

“Ricky, your mom has been killed,” she said. I went numb. She said that my mother had been at the same bar she had stormed off to after she threw that $11 at me 12 years earlier. She had been raped and bludgeoned to death and left in a tomato field in Marysville. Today, I often wonder what kind of life she might have had if she had found AA.

After the shock of her death, I did what any alcoholic would do. I drank. Years of pain and misery, loneliness and godlessness ensued. It would be 10 years before the idea of God would even enter my head again. I started getting in trouble. Had I not entered military service, which included a post in Germany, I probably would have ended up in serious trouble or dead.

Germany in the early 1990s was a great place for a practicing alkie. Great beer, great women and tons of free time. A friend of my dad’s, Jim, had told me the army would straighten me out. He was right. Even so, I landed in jail within a month. Despite that, I soon found a host of friends who drank and partied like me. In Germany, I rode in a professional rodeo circuit with a buddy of mine. We bought a van and traveled all over Germany, riding and roping and drinking. We rode the first-ever rodeo in East Germany after the wall came down. They have jails there too. I was eventually deployed to Iraq and became a combat veteran. But the main thing the army taught me was how to drink more and more often.

When I returned to the states, I got married and my drinking progressed. When my daughter was born, I managed to stay sober for a few months. I vowed in my heart that I did not want her to have the mixed-up life I had. But we pass on our pain. My daughter saw me hit her mother—something that would haunt me for a long time. That marriage did not last long. When my wife left me, I used her absence as a reason to drink, only this time I was drinking to die. There I was, at home again in my comfort zone.

Soon my friends began to abandon me. Even my alcoholic family turned their backs. This began the falling-down, blacking out period of my drinking. I was in that incomprehensible demoralization that Bill W. talks about. Where did that “special” boy go?

I now started thinking about suicide. At one point, I was working out of town on a bridge job with my dad. We had our trailers parked next to each other on a lake. I was suicidal every day. I took pills during the day to make it through work. When I got back to my trailer, I slammed a six-pack of tall boys and went to bed. I slept with a .22 caliber revolver under my pillow. When it got too bad, I would tell my head to shut up, put the barrel in my mouth, but I couldn’t squeeze the trigger. Then I’d hit myself with the gun and call myself a sissy. I didn’t want to live but I was too scared to die.

In the last year of my drinking, I lost yet another job. I would get drunk and watch TV. I remember seeing the movie My Name is Bill W. and crying like a baby. Then, something happened. I caught wind that my buddy Don had sobered up in AA. One night, as I was selling my car to my bartender for $200, I had a moment of clarity. I said, “Tom, I think I have a real problem with drinking.” He said “Yeah, I have been trying to tell you that for years.” As he dropped me off in my car—which was now his—I turned to him and said, “Something feels different.” That was the day I quit drinking. I went into the house and told my girlfriend to find me an AA meeting. She found one, but it didn’t meet until Tuesday. It’s incredible to me that God kept me sober until then. On Tuesday, I hit my first AA meeting.

When I got to the door, I was greeted by a woman named Loretta. I asked if this was an AA meeting and the sweetest words came from the sweetest voice I’ve ever heard. She said, “Sit down, buster, you’re in the right place.” After the meeting I was approached by a man who had over 20 years in the program. His name was Art. He grabbed my arm and asked me two questions: “Do you want to quit drinking?” and “Are you willing to do anything it takes?” He made me look him in the eyes and answer him. It was hard to look someone in the eyes in those days, but he was serious. I said yes to both questions.

Art came over to my house every day with his beat-up old Big Book and we would read it together. I remember the gentle, loving way he turned the pages of that book. He took me to two or three meetings a day sometimes. After I made my 90 in 90, Art had to move back to Ohio to help his mom die. She was 99 years old. Art was the embodiment of our program.

Three years after he moved to Ohio, I learned something about Art and AA. I was at a men’s retreat, where I shared the story with a guy named Cliff about all that Art had done for me. After I was done, Cliff told me he knew Art. He said he recalled Art at the time I had shared about. He said, “At the time, he needed you as much as you needed him.”

Everything I thought I knew about life, I’ve had to unlearn. My teachers appear when I am ready. The God I yearned for my whole life is now my loving friend and creator. He loves me no matter what. The friends I have today are important beyond belief. They let me make mistakes. They help me heal and show me how to live. The sponsor I’ve had for eight years is caring, gentle and compassionate. But he gives it to me straight. We are going through the Steps again.

My daughter has had a sober but imperfect father for 11 of her 15 years and I love her very much. She is my teacher, as is my father, who’s coming up on seven years of sobriety. I was at a meeting with him last week, and overheard him talking to another person in AA. “That’s my son over there,” he said. “We do this together now.”

I can hardly see through the tears as I write this. I owe it all to God and AA. A verse in that Kris Kristofferson song I sang at the bar all those years ago says it all: “Maybe lord, I can show someone else, what I’ve been through myself, on my way back to you.” This is how we are meant to go through life, sharing and caring our way along the high road, one with another in love.