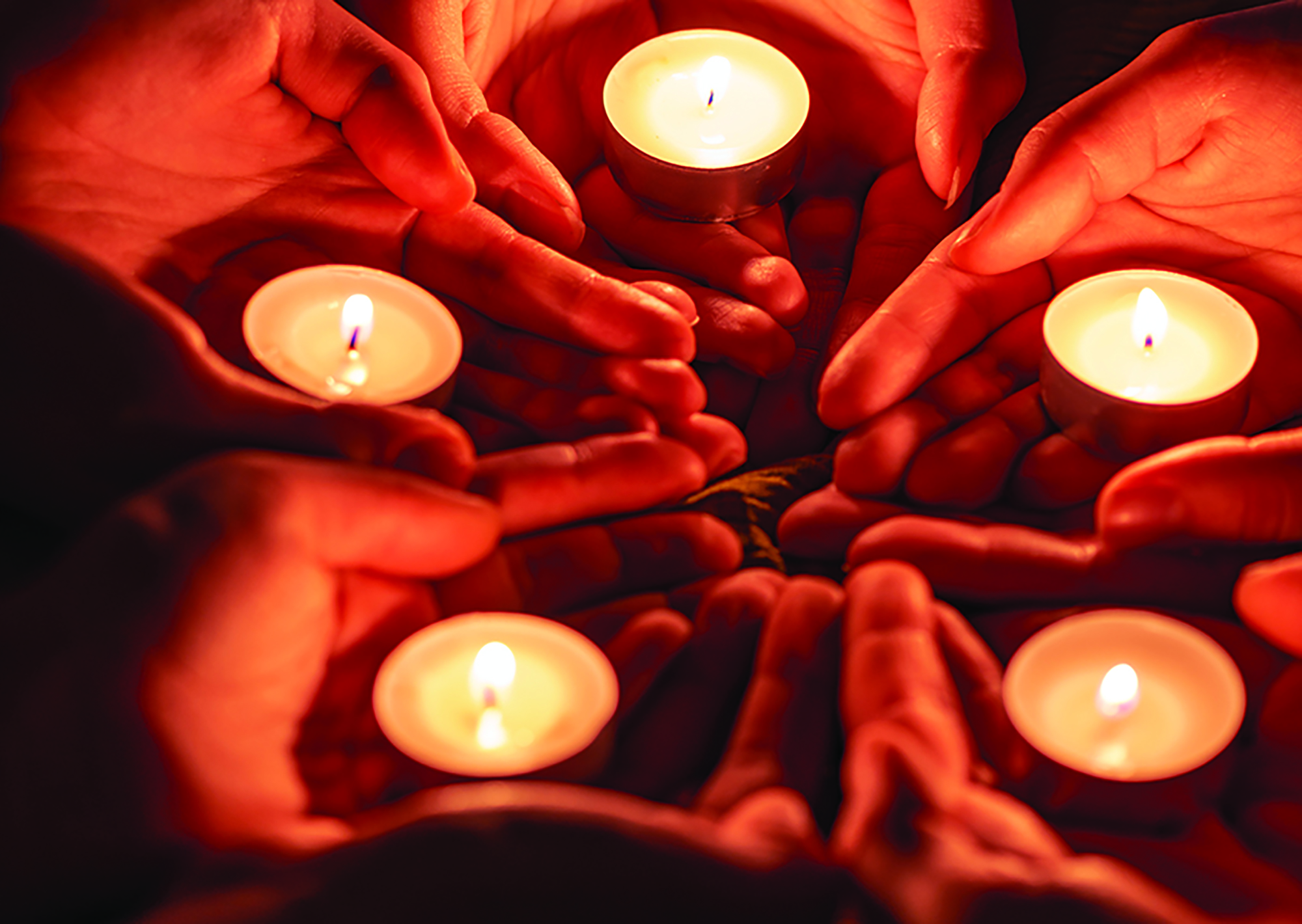 Light & hope
I was so lonely when I finally made it to my first AA meeting in Philadelphia in October of 1983. I was 22 and so shot out that I was hearing music. I asked an old-timer if he heard the music too. I thought for sure he was going to say, “My young friend, you have more problems than what we can deal with here.” Instead, much to my surprise, he looked around the room and said, “Go sit next to Tommy. He thinks he sees things.” That was over 33 years ago.
Gratefully, the only music I hear now is the laughter of my fellow home group members. Together, as a group, we recover.
Although many of us have decades of recovery, we still look for the new member who is looking for a way out. Once a newcomer appears on our doorstep, we say, “Welcome, would you like to hang out with us? We’re all going to a water park and would love for you to join us!”
I believe we are given a flickering candle by our creator when we arrive in AA. My job is to find others holding those candles and stay close. Today, I stay close to my home group and join my fellow sober mates so our candles can become a huge flame, so the newcomer can see hope.

Kicked into high gear
I was just a couple of months sober when my home group’s old-timers suggested that I get a subscription to Grapevine. They realized that I was reading the Big Book, but not comprehending anything in it. Maybe Grapevine would be more appealing as an introduction to AA, they thought.
I couldn’t wait for each issue. I had a connection with nearly every article, just as if it were a share at a meeting. I read the magazine cover to cover because I was afraid I’d be quizzed on it by those long-timers. Also, I was still looking for the magic pill, and didn’t want to miss it by skipping any of the articles.
Around six months sober, I read a story by a 16-year-old boy and was amazed, for it could have been written by me. It was exactly like my story, both the fun and the collapse. And 16? No way! I didn’t enter AA until I was 39. Reading his story kicked my involvement in AA into high gear, and it still remains so today.
I have more than 20 years of continuous AA under my belt now. I think about that young author often. I wonder if he stayed sober. You really never know where the message is going to come from. It may just be out of the mouths of babes.

Thirsty birds
One of my best ah-ha moments as an alcoholic occurred at 30,000 feet. I was on the plane, doing my crossword puzzle, and I encountered the clue “A six-letter word (a noun) meaning ‘reason to drink.’”
Immediately, a number of possibilities flooded my brain: d-i-v-o-r-c-e (too many letters) l-o-n-e-l-y (nope) a-n-g-r-y (not enough letters).
After solving a number of words around it, I came up with the answer: t-h-i-r-s-t. Thirst? What a surprise. That was the last reason my alcoholic mind had considered.
I poked my husband next to me, who’s also a “friend of Bill,” and asked him if he knew a six-letter word for “reason to drink.” He guessed “divorce, depressed, wedding…” When I told him the answer, he too was as astounded. In all the years since that plane ride, only one of the many alcoholics I know has ever come up with the word thirst.
I understand that people sometimes take a survey in which they answer questions to determine if they are alcoholics. Perhaps they should add that question to one of those surveys. It may be a really fast way to find out if you’re an alcoholic!

Getting out of “my”seat
Day after day, I go to my AA meetings, get my coffee and sit in the same seat. You’d think my name was on the back of the chair! I’ve been doing this same thing for years.
When a new person enters the room, they usually sit by themselves at the end of our table. Some meetings have greeters who stand at the door and welcome everyone as they enter.
Lately, I’ve been getting up and walking over to the new person, sticking out my hand and saying, “Hi, my name is Ernie, do you mind if I join you? What’s your name?”
I hope my outstretched hand will help in breaking down the wall of fear they may have. Having someone who cares show some interest might make them want to come back. What I see too often is a new person left to fend for themselves.
I don’t want to seem like I’m better or above anyone. I’m just one drink away from being in the new person’s seat myself. Yes, even the one with my name on the back of it.

Rounding up
I can’t even begin to count the number of times I’ve heard in meetings—and forgive me, even in Grapevine articles—the practice of rounding one’s amount of sobriety (months, years) up to the next number.
I can only chuckle to myself about the way some folks in AA count. It reminds me of a fact I learned in kindergarten: 19 comes after 18.
What an enormous disservice this is for a newcomer to hear this kind of counting. It appears to some members that once X amount of sobriety time is achieved, then the next sobriety milestone is a given. This “I got this” attitude is one of the biggest red flags I see in AA. Next comes drifting away or relapse.
On any given day, I am not promised I’ll be alive tomorrow, much less sober.

Not a bad goal, right?
Ever since mankind started squeezing grapes to make wine, a significant percentage of us have become alcoholics. Yet a cure has never been found. A proportion of us humans have some aberration in our bodies that brings about a sensitivity to alcohol that “normal people” do not have.
Today, I don’t have to decide whether I am or am not an alcoholic. I can’t change that fact. I will always be an alcoholic as long as I’m alive. Why waste my time wondering? It’s not debatable. For me, acceptance is the word that fits. The program reinforces my acceptance through the Twelve Steps, for they constantly help me become the person I want to be: a sober, serene, productive, empathetic, giving, happy individual trying to make the world a better place.
I am now alive, active, useful and loving in all my affairs each day. Not a bad goal for us humans, alcoholic or not.