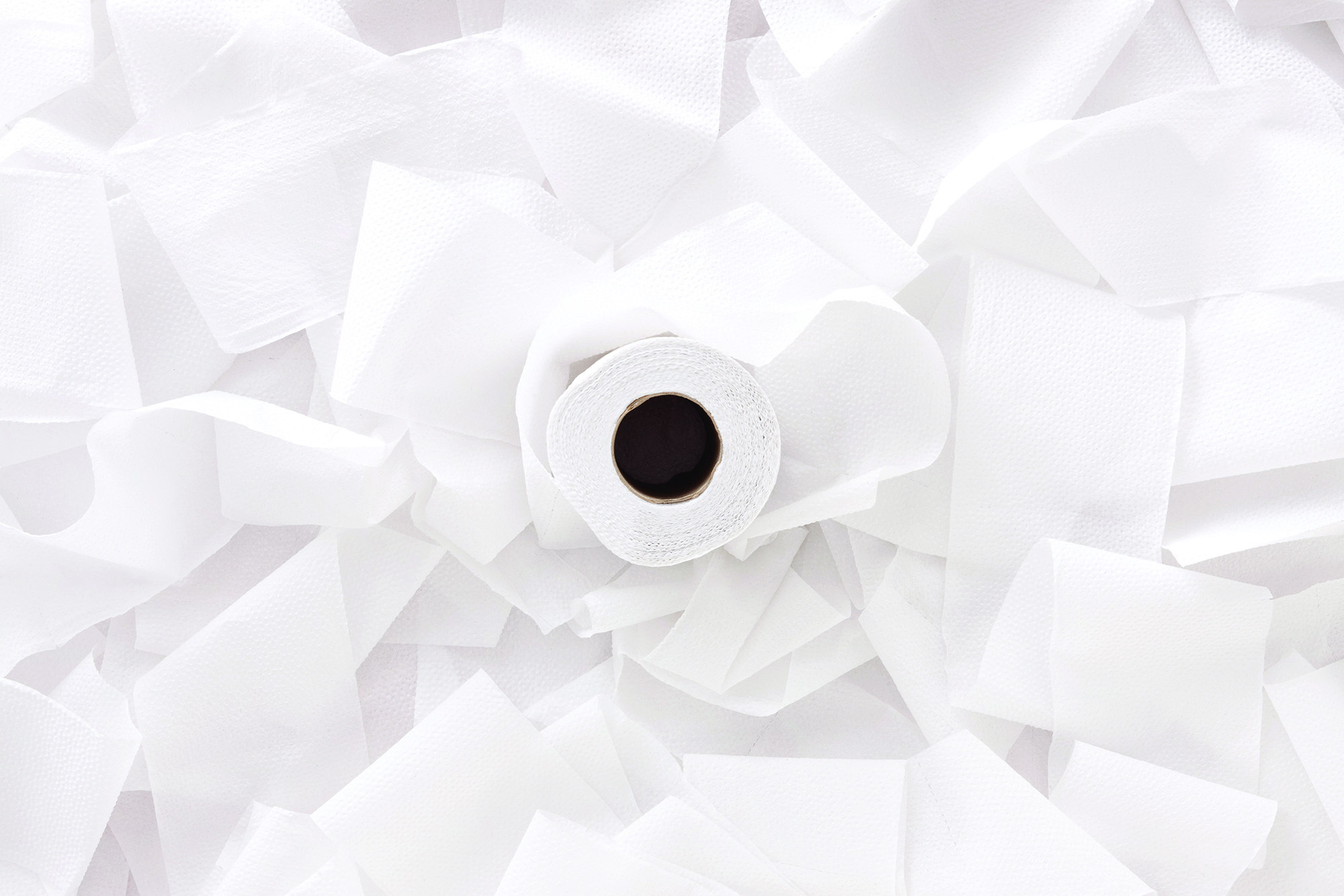 By: Betsy S. | Tucson, Ariz.
At four months sober, she had no money—not even for toilet paper. Thankfully, she had a sponsor

I had just used the last of the toilet paper. And as usual, I carried the little gray tube out to the recycle bin. Because I try. I try to be a responsible person on the planet.

So this morning I asked myself why I’m so careful with toilet paper rolls and other things that I have. Things like money. And photos. I always keep a spare can (ok, four or five cans) of tuna fish in the cupboard.

When I got sober, a can of tuna cost less than 50 cents. Today I buy it in packages of 10, usually around $13 for the pack. There’s your inflation. We can talk about the toilet paper and price inflation and the dangers of eating tuna another time, because I want to make a point here about the reality of getting sober and staying that way. And this bears on why I can be “harsh” about our behavior in sobriety.

I didn’t get to AA on any kind of winning streak. I had drunk myself into quite a mess. I destroyed precious and priceless relationships, complete with photos to document it all, long before cell phones and social media. I had stolen from people I loved the most. I stole their time; I stole their love and affection; I stole their money and their possessions. I frequented pawn shops and bars, usually on the same day. I neglected and often abandoned my children. I knew no God.

My sister and my brother, who were much older than me, had lives I envied. Secure family lives, with homes, cars and a feeling of warmth and togetherness.

I had become an unwelcome guest everywhere because of my drunken behavior. My children were afraid of me, as were all the people I associated with. None of these disclosures are easy for me to write. I continue to fear the harm that I might cause in writing them. But I no longer live in my past and I certainly wish no ill to come from what I write. However, it’s imperative for people who I try to help to have a thorough understanding that this ugliness is where it all began for me, to accept without reservation that I am, indeed, an alcoholic. That I drank myself into a place that knew no right or wrong. That I was delusional and drunk most of the time.

Finally, when I was approached by those who lived in sobriety, I sensed they had a real solution. They weren’t “better” than me. Indeed, they were just like me. And I sensed that if I could just put my false pride away, they could actually begin to teach me how to live. How to stop, not only drinking, but my crazy way of thinking. Always trying to plot and plan my next move. Always having a “better” idea. That was so incredibly difficult.

I began to really surrender to an idea. I realized that it was because of me that my life was ugly. AA uses the word “unmanageable.” My kids were scared. The ego is a monster. It will still control me if I don’t surrender on a regular basis. It can still have me believing I’m right and everyone else is wrong. My ego will whisper sweet nothings in my ear. It’ll build a case against people, usually in about 30 seconds.

And what might this have to do with tuna fish and toilet paper?

When I got sober in October of 1988, my life was in shambles. I had no car, no job, nowhere to live. I had worn out my welcome with my family. I had to turn to these total strangers in AA for help.

For three months, my kids and I lived with an acquaintance from Al-Anon. It was humbling. I didn’t drink. I cleaned the place and I tried to earn my keep. I went to meetings, sometimes with my kids. It was a million dollar home we were staying in and I didn’t feel that we belonged there, especially after some of the ratty motels we had lived in.

I knew this was a time when I absolutely had to surrender and accept my circumstances and do what I could to change and get better. I went to enough meetings in that first 90 days to learn that AA offered the change I was seeking. So I took on the challenge of “one day at a time,” a notion that I actually hated because I thought it stupid and moronic, not “new age” enough for me.

I swallowed my pride and took on a boatload of criticism from my family when I applied for welfare. My former in-laws were extremely critical because their son had to pay child support. Fearing criticism became a nightmare for me.

I did get an apartment and my first welfare check came when I was four months sober. It was $450 per month, same as my rent. There was no money for utilities, let alone anything else, such as supporting two kids in diapers. Bless the two men who owned the apartment building. They took a huge risk by letting me in and even cut $25 off my rent if I kept the yard clean, which I did with the help of people in AA.

I’ve skipped so many details here. There was the husband who left me for a stripper, one who could shoot heroin and not throw up. I would’ve tried to use heroin with him, but somehow I just knew if I stepped into that world, I wouldn’t come out. I had already been hospitalized twice for complications of alcoholism. And besides, these little boys of mine needed a mother.

So there I was, four months without a drink. Sad, scared, alone. Fearing everything and everyone. I was going to AA (luckily, my apartment was close to my meeting) and I was trying to be grateful like the people I heard in my meetings, but I wasn’t grateful. “Don’t quit five minutes before the miracle,” people said. I kept wondering where my miracle was. But the miracle had already occurred, and I hadn’t recognized it. I hadn’t had a drink in four months. I had taken on a side job cleaning apartments, which got me $50 per apartment. Sometimes I could clean as many as three a week. Yes, I was cheating the system and my conscience bothered me about that, but I had a family to support.

And then one day, when the rent was paid and the electric bill was paid and all I had left to my name was pocket change and there was no toilet paper and no food, something happened. I fell apart. Literally, just fell apart. I couldn’t make a decision. I didn’t even know what decision to make. So I called my sponsor. I told her about my circumstances. She told me to steal some toilet paper.

What? An AA person told me to steal? I couldn’t believe it. There I was, trying to get better. To be better. And she was telling me to steal?

“Look out your window,” she said. I did. “Isn’t there a “porta potty” across the street at that construction site?” I said there was.  “Go get a roll of toilet paper,” she said, “and relax. God’s in charge. It’s going to be OK. Use that pocket change to buy your kids a can of tuna.”

And to this day, years later, I do what I can to assure other members that it’s going to be OK.

I’ve outlived most of my critics. I’m retired now, and happily married. I go to my AA meetings every single day. And I have a fairly good supply of toilet paper. And, as you already know, a good stash of tuna. I’ve repaid my debts to society and my family many times over.

Here’s a little part of what life became. I went to school. I went to school a lot. And then I went to work—a lot. My kids, and even my mom, would sometimes call me at work and tell me they felt neglected. And over the course of the next 20 years, I would do what I could not only to lessen their feelings of neglect but also to carry a message of hope to women like me, who struggled with alcoholism, insanity, poor judgement and rotten thinking. I’ve listened, cried with, suggested, provided pens, paper, literature and done anything else that might help others grab hold of this incredible gift of sobriety.

I’ve held babies, attended way more funerals than I ever imagined took place on the planet, and sponsored the children of women I sponsored. I’ve put children into the custody of the sheriff’s department because their mother had to try the game one more time. I’ve picked up the pieces of broken glass in my own living room because, like the Big Book says, “a drunk may smash the furniture.” I’ve been yelled at, hung up on, threatened with a beating and a gun. I’ve been to jails, detoxes and asylums. I’ve talked to family members and sat in emergency rooms.

If there’s any lesson to be learned from my story, it’s this: That our “one day at a time” slogan is not stupid or moronic. It’s essential. It’s the only way to get through things that are so much larger than whether to buy toilet paper or tuna fish. This is the way I’ve lived for 11,029 days now. I’ve lived this way through life’s ups and downs, all while raising five teenagers, about which a whole chapter could easily be written. I lived through the deaths of both my parents. Two deployments of one of my sons to Afghanistan, where the fear was so real it hasn’t left me, even now. Faith is indeed a way that works. Being right-sized is a gift, not a punishment. There is no finish line.

So, keep your own stash of toilet paper and don’t be hurt or insulted if someone steals some. And for the record, I don’t really eat much tuna fish at all.