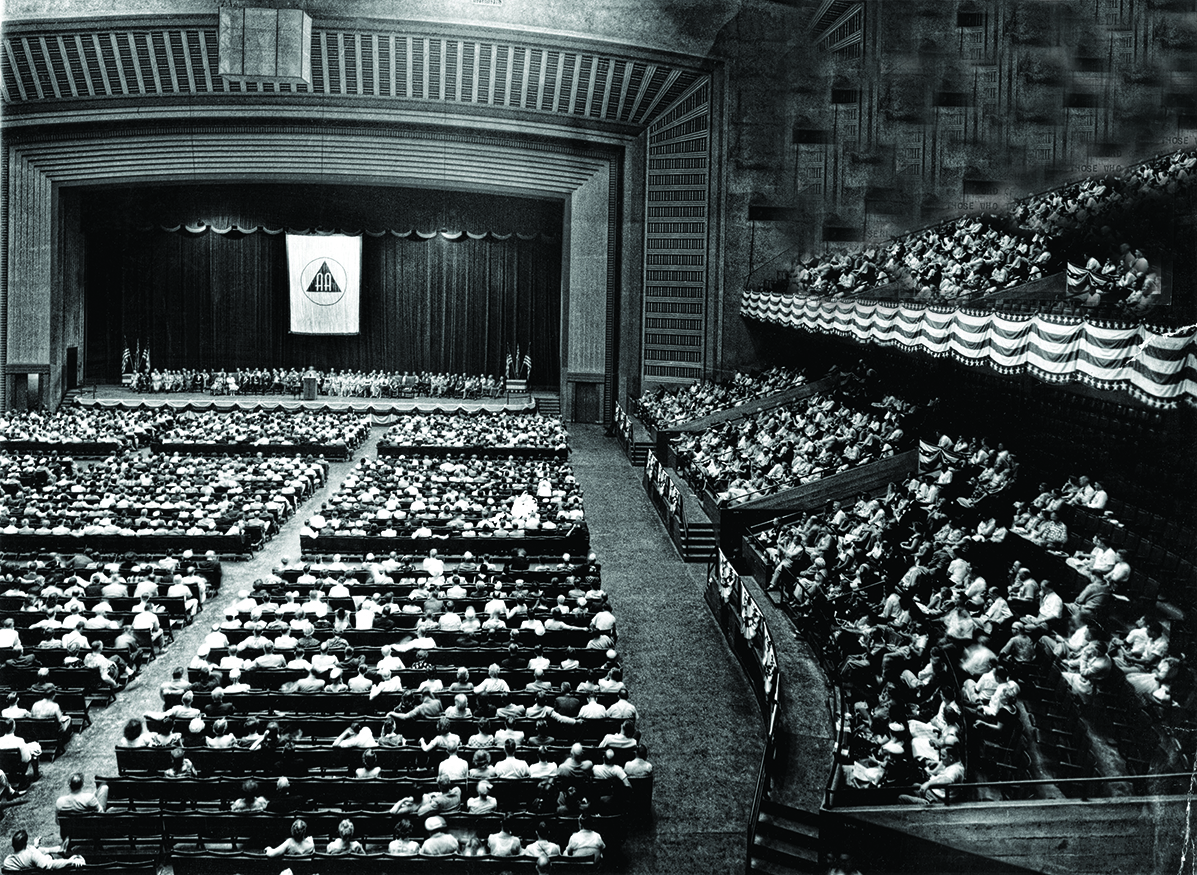 By: Julia D. | Westfield, N.J.
The making of the book Our Great Responsibility: A Selection of Bill W.’s General Service Conference Talks (1951-1970)

Julia D., an editor in the AAWS Publishing Department (as well as long-time AA member), spent the better part of the past two years working on the latest AA book, Our Great Responsibility: A Selection of Bill W.’s General Service Conference Talks 1951-1970. Here is her story of the journey of the book…

In the fall of 2016, I started work as a freelance project manager on Our Great Responsibility. At that time, work on the book—then called Unity in Action—was well underway. The talks were already transcribed and beginning to be organized into a book format. The history and preface chapters were just being written.

Upon reading the transcripts for the first time, I was struck by how relevant our cofounder’s insights were to AA today. More on that later—but let’s just say it got me more than a little excited to be involved in the project.

The first phase of my task was to “edit,” for lack of a better term, the talks themselves, and it was a bit of a balancing act. On the one hand, the goal was to stay true to the exact verbiage as much as possible, primarily for reasons of accuracy. As you know, we don’t change Bill’s words (or Dr. Bob’s words, for that matter) on principle. On the other hand, the prose had to be readable. Bill may have used notes, but he spoke colloquially and sometimes off the cuff, occasionally rambling a little and rarely missing a chance to get a laugh with a good story about an AA member—especially when that member was himself.

It was exactly this style that made Bill such a great communicator, and we wanted readers to feel they were really hearing Bill himself, that they were practically in the room with him as he told another self-deprecating tale. This was central to our mission with this book.

At the same time, you can imagine that such a casual speaking style might present challenges when it’s put into print. Just go to an AA speaker meeting and notice how many complete, grammatically correct sentences there are in a 20-minute qualification. (Well, actually, don’t do that.) In any event, we approached it like a puzzle, employing punctuation and absolutely minimal editing to untangle Bill’s sometimes labyrinthine sentences and to fine-tune his phrasing while doing our best to retain the rhythms of Bill’s speech, his warm and welcoming tone, and his charismatic voice.

Once this aspect of the project was more or less complete, it was time to visit the GSO Archives, where I got to do some “shopping” with Archives Director Michelle Mirza and her indulgent staff. (By this time, I had become a full-time employee of AAWS and so was able to pester them daily.) It was a real thrill to pore over contact sheets full of slides containing images of the founders—people I’d heard and read about for years—chatting with each other, drinking coffee, sometimes seemingly unaware of the photographer.

Our designer, nonalcoholic Amado Medina, did yeoman’s work cleaning up the images—removing tiny scratches and dust specks, and developing contrasts to bring the black and white images to life. Once this ball was rolling, I gave the manuscripts to nonalcoholic Spanish editor John DeStefano and to French editor Juliette L. for translation. Then came indexing and translating the index (which was almost as much work as the book itself); followed by proofreadings in all three languages.

It took the dedication of dozens of people—including our own intrepid production manager, nonalcoholic Ed Nyland, who flew to Wisconsin twice (once during a snow storm) and literally stayed up all night to oversee the printing. The book had become our own great responsibility, and we all—alcoholic and nonalcoholic alike—felt this. Not one decision was made by a single individual; from beginning to end, the project consisted of one mini group conscience after another.

For me personally, as an alcoholic in recovery, there was much more to working on Our Great Responsibility. First of all, these were our cofounder’s words. Now, I am not someone who reveres the founders as gods, but I am absolutely certain that were it not for Bill and Bob, I’d be six feet under, or at best, alone in an apartment somewhere, alternating between misery and delusion. I owe my life to this program—and so do millions of others. Tackling this project was not something I could take lightly. It was a little daunting, to be honest.

But if I had some trepidation at the beginning, it was quickly dispelled by Bill’s “approachability”—that warm tone I spoke of earlier. I felt it. After all, he was speaking to me, too, as a recovering alcoholic. I hadn’t expected that. And, as I delved into the content of the talks, I was amazed at how true Bill’s words ring today—and how pertinent his insights are for me, on a personal level.

Throughout the talks, the twin principles of humility and, yes, responsibility, recur as themes, reminding me of the work I need to do, if I am to grow in understanding and effectiveness as a member of Alcoholics Anonymous.

First, where am I with humility when it comes to my beliefs? Am I truly open-minded, receptive to alternative views, or do I think I know best?

Bill says, “Simply because we have convictions that work very well for us, it becomes quite easy to assume that we have all of the truth. Whenever this brand of arrogance develops, we are playing God. … [But] in AA we are supposed to be bound together in the kinship of a universal suffering. Therefore, the full liberty to practice any creed or principle or therapy should be a first consideration.”

Bill reminds us that the founding of AA itself and the creation of the Big Book wasn’t pretty either: “Anybody who thinks that those of us who prepared that book were people running around glowing with inspiration and clothed in white robes is very, very much mistaken. I won’t deny that we were very high, and enthusiastic and excited, and certainly we must’ve been somewhat inspired. But in other respects we acted like hell.”

He’s humble even about AA, saying that, “In no circumstances should we feel that Alcoholics Anonymous is the know-all and do-all of alcoholism.”

But while humility is essential to our recovery and our primary purpose, it must be put into action if we are to carry the message to help the still-suffering alcoholic—which is our responsibility. And where am I with that? Am I really going out of my way to extend my hand, or doing so only when the spirit “moves me”—or when it suits me?

Bill recounts an anecdote of a visit from a doctor who’d been sending lots of folks to AA, but who found many were coming back. The doctor says that one man came back and reported that he’d gone to a few meetings, but it hadn’t “worked for him.”

The doctor’s response? “Of course the fellow didn’t really try hard enough.” But Bill didn’t agree, and instead commented, “Maybe this was partly because nobody went out of their way to make friends with him. Loving friendship is a part of the sponsorship.”

I felt that one. Sure, I’ll give my phone number when asked, and I’ll sponsor the enthusiastic woman who’s hit bottom, willing to go to any lengths. But what about the one who doesn’t seem like she “wants it” enough? Isn’t that just one more of my own preconceived notions? Am I compassionate and loving, even when—or maybe especially when—it doesn’t come easily? It would seem to me that responsibility begins where convenience ends.

Clearly, working on this book struck a few chords with me, and my hope is that you will find the same. A few months ago, I pinned this passage from page 84 (of the new book, that is) to my bulletin board:

“As we know, all AA progress can be reckoned in terms of just two words: humility and responsibility. Our whole spiritual development can be accurately measured by our degree of adherence to these magnificent standards. Ever-deepening humility, accompanied by an ever-greater willingness to accept and to act upon clear-cut obligations—these are truly our touchstones for all growth in the life of the spirit. They hold up to us the very essence of right being and right doing. It is by them that we are enabled to find and to do God’s will.”

Maybe I can let you know in a few months how I’m doing with that.