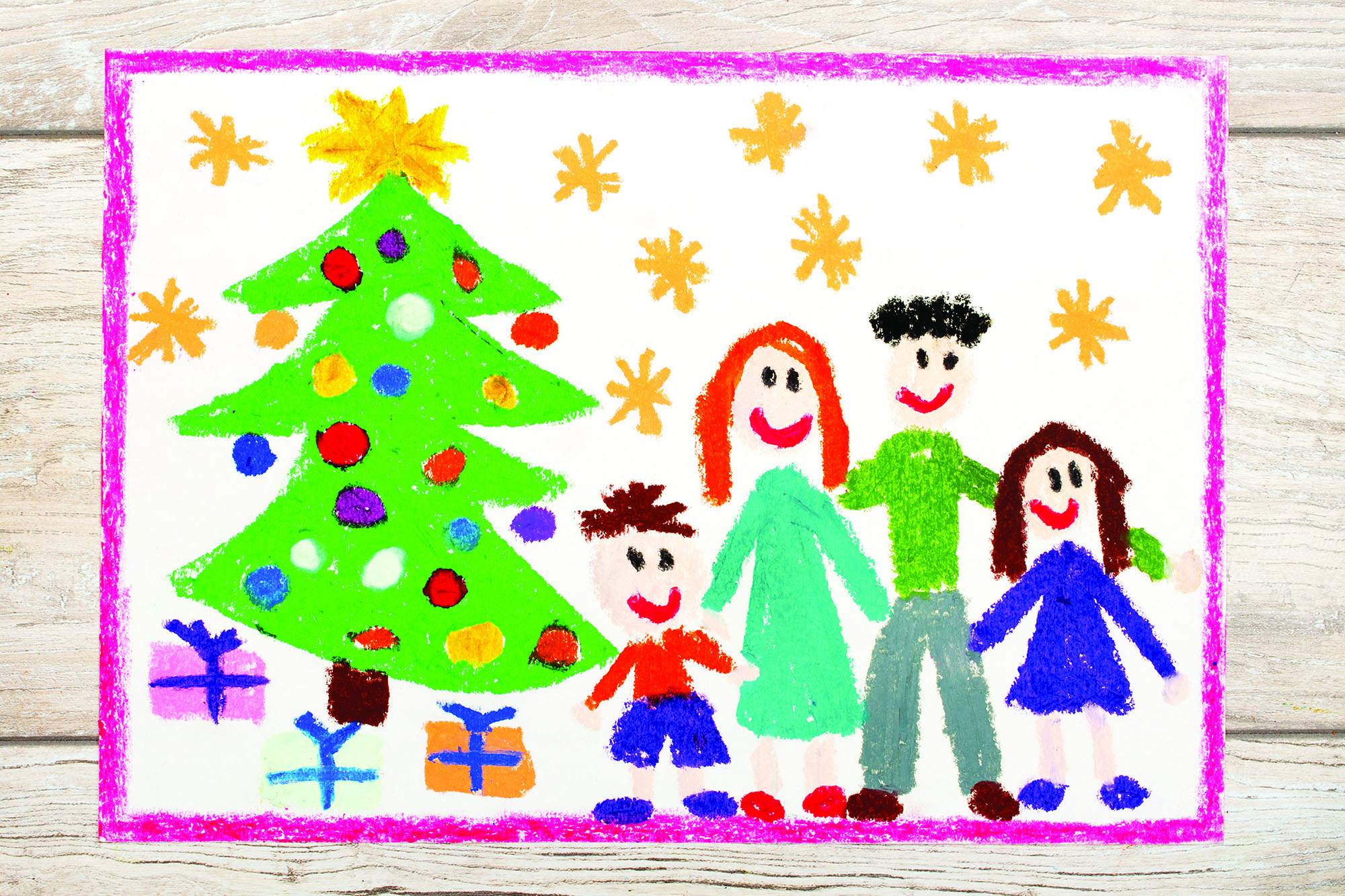 Back in the picture

By: Scott A. | West Hollywood, Calif.
A holiday drawing shows a newly sober dad how precious his sobriety is to those he loves most

It was late December and my wife and I had been invited by my 6-year-old daughter’s teacher to come to a parent gathering at her elementary school. We were invited to walk to the classroom’s far wall, which was covered in colorful crayon pictures done by each child. The drawings portrayed each child’s family during the holiday of their faith—Christmas, Hanukkah, Kwanzaa and others.

My wife and I found my daughter’s crayon picture soon enough and, just like all the other children’s drawings, it was of the family home with parents and children inside. Every parent around me found themselves inside their own home, at a festive table or at a decorated tree.

When I searched for myself inside our house, I wasn’t there. In the drawing, my wife was sitting inside at the living room table. Next to my wife sat my daughter with a wide smile ripe with the promise of the holiday. In the seat where I customarily sat, I saw our family dog, a sweet boy we had adopted only several months earlier at the Humane Society. But I was nowhere to be found.

“She says you’re there, but you just can’t be seen,” a voice behind me said. It was my daughter’s teacher. She had approached me because she felt she should offer a word of explanation. I nodded and did my best to shrug it off but the evidence before my eyes was undeniable. My drinking had removed me from my house and family.

The drive home that night through the winter dark was as cold inside the car as it was outside. My wife didn’t know what to say to me and I’m not sure she would have said it if she had an idea of what to say. She was tired. She was tired of the secret trips to the liquor store, the lies, the hidden bottles, the incoherent behavior every evening and the inevitable alibis the next morning that turned into apologies and promises.

The idea that I was an alcoholic was abhorrent to me, but my daughter’s drawing was something I could not get out of my heart. And if I didn’t do something about my drinking, I felt, I would be out of my daughter’s heart for good, not to mention my wife’s. Most importantly, I would take leave of my own heart because I had come to despise myself and to question who I had become.

At the end of that year, I made a decision to give up drinking and join AA. I attended meetings, talked to people and read the literature. I also began taking part in my daughter’s days and evenings.

Before this, I had always been “too busy” with my writing, which is my profession. I began talking to my daughter and, most of all, listening. I started volunteering at her school for any job or chore where I could “be of service.” My girl was very suspicious to begin with, wondering how long this would last and when the bad night and apologetic morning would arrive, but through the first three months of the year, I stayed sober.

When Easter rolled around, my wife and I were invited to our daughter’s school again and, as before, the far wall was covered with drawings the children had made of their families. I was prepared to not see myself in my daughter’s picture. It had only been three months and I had been a heavy problem drinker for all her short life and for years before. I approached the picture and took a look for myself in the house.

Again, I wasn’t there. But I was on the front lawn. Sure enough, just past all the painted eggs on the grass, there I stood. The teacher said not a word to me this time, but passed by offering me a small smile. I stared at my own figure, not inside the house and certainly not at the table with my wife, daughter and the dog who still sat in my seat. But I was there.

The next few months saw me reading my Big Book, going to meetings every day and even sharing, which is something I did not see myself ever doing. We writers are supposed to be silent and cloistered. But I could not stop from sharing that I had appeared in my daughter’s Easter drawing, and I told the story proudly.

By the time June arrived, I was coaching my daughter’s softball team, carrying ice coolers, umpiring games and staying sober. The summer school that my wife enrolled my daughter in saw us back in the same room with the same teacher just before the Fourth of July. As I stood before my daughter’s holiday picture, I was brimming with joy at the sight of our house under a sky of fireworks. My wife, daughter and our dog were still at the table, but I was standing on the front porch. In just five months, I had made it back onto the front lawn and now, I was on the porch.

I had found a place in my daughter’s heart that I had never known before. She was anxious to tell me about her life—her ball games, her summer schoolwork and her friendships. But the glory of the feeling of her wanting me in her life was accompanied by an anger I felt at myself for having squandered so much time with her. A bitter self-judgment took hold of me. I struggled with regret and recrimination. But the meetings and my sponsor kept me focused on not shutting the door on the past. I had to learn that I had a problem that was beyond my control and now I was finding a solution and a peace, as well as a relationship with my Higher Power. It was this Higher Power that led me back into my daughter’s picture. Where would it lead me next?

Four months later, I was busily arranging my daughter’s Halloween party. I was now sober for 10 months and relishing every time she would call out my name to share something with me, whether it was a victory at school or a small heartbreak during recess. No longer having to convince myself to pay attention to her in the evenings, knowing I was well past being inebriated, my sober ears and heart were open.

Then something special happened. After 10 months of me listening to her, she began to listen to me. My daughter began to ask me what I thought about events in her life, and she relished my stories from my own childhood that paralleled her present problems in some way. In short, she began to openly love me again. She’d take my hand or put her head on my shoulder as we went over her schoolwork or read a book.

And so at the end of October I found myself in her elementary school classroom. And there I was, inside the house, in the front foyer on Halloween night handing out candy to a line of trick-or-treaters while my wife, daughter and our dog sat in their accustomed places at the table.

Halloween’s October gave way to Thanksgiving’s November. The picture my daughter drew placed me in the kitchen carving up the turkey for the rest who sat at the table.

Then it was Christmas again. The sober days passed by without me desperately counting each one of them anymore and I stood in my daughter’s classroom and stared at the next Christmas crayon drawing of our family in our home.

I didn’t have to look through every window to find myself. There I was at the living room table between my wife and my daughter. Our dog was still sitting in my spot, but my daughter probably thought it would be unkind to unseat him after he’d gotten used to that chair. So she gave me another one at the table and I took it gratefully. That’s what the smile on my face in the picture told me and that is what the upcoming one-year anniversary of my sobriety told me.