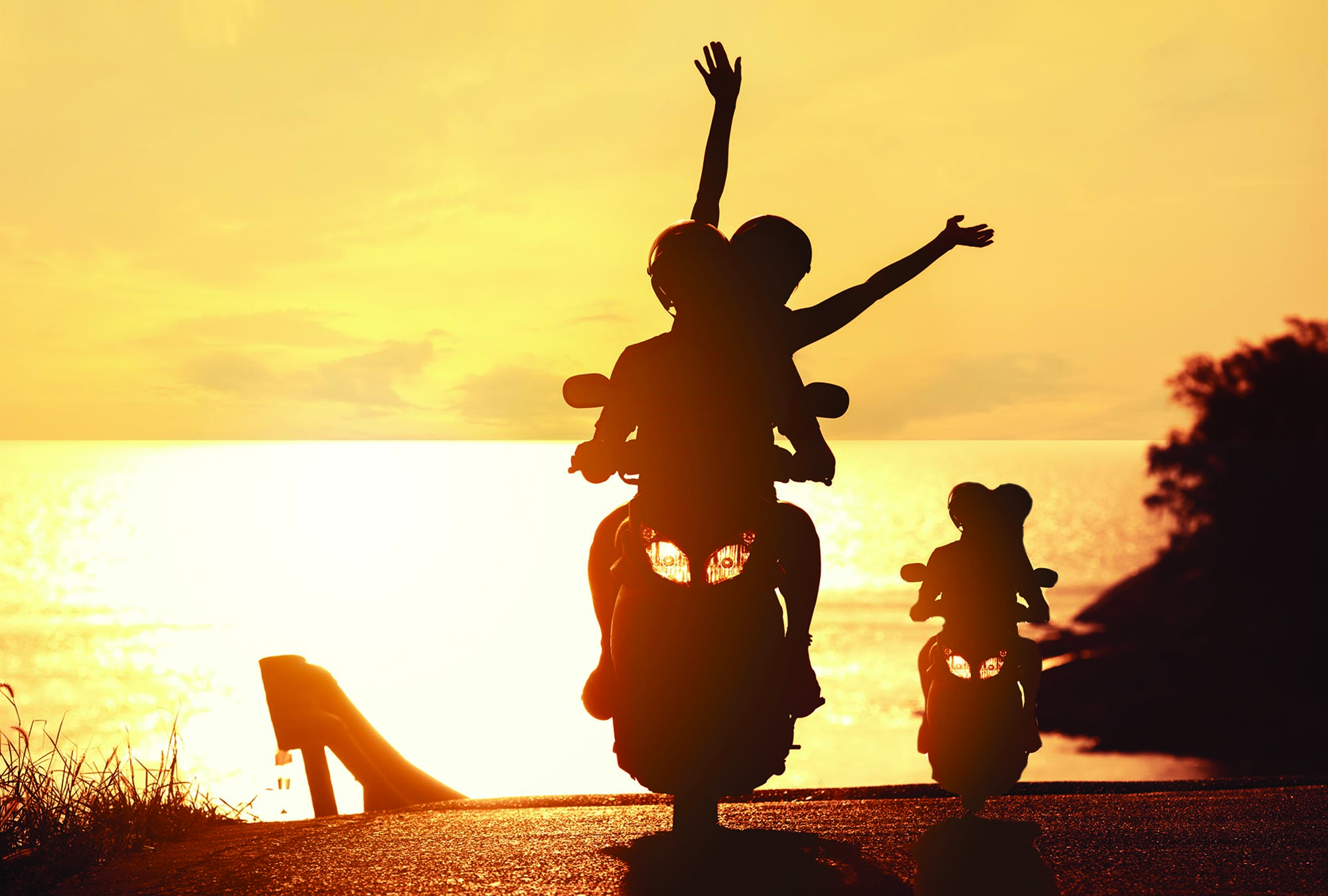 By: Alice M. | Cleveland, Ohio
At five months sober, she was about to give up. But a late night motorcycle ride gave her the jump start she needed

It was a beautiful, late spring day in Northeastern Ohio in June of 1988. The temperature was warm and the threat of snow finally dissipated. The sky was a lovely blue punctuated with puffy cumulus clouds. My dear friend Bonnie was encouraging me to join her at an AA meeting. I was ambivalent about going. The drive from my apartment in Shaker Heights to Berea was a long haul, even on the new freeway that had just been completed.

My little red car was perfect for me—a stick shift, somewhat rusted out. OK, very rusted out. You could see the road through the floor on the passenger’s side. I had totaled my last car and I was working part-time and attending school on my dad’s dime, getting drunk and high as often as I could. I purchased this little car for $800 in cash that I scraped together. It was an alcoholic’s car if ever there was one. It carried me back and forth on a wing and a prayer. I had been going to AA meetings in Berea on a weekly or biweekly basis and I sporadically attended meetings in my neighborhood. I had strung together five months of not drinking and I was just not sure that I wanted to go to any more meetings.

My alternative to meetings at that time was to isolate myself in my third-floor efficiency apartment and ruminate on my existence. I loved that little space. The people I rented from lived on the second floor and, though I didn’t know it when I moved in, they were both sober members of AA.

The apartment was in an old mansion built in the 1920s, situated directly across from a rapid transit stop. There was no kitchen but there was a small refrigerator, a two-burner hot plate, a percolator coffeepot and a toaster oven. I washed the dishes in the bathroom sink.

I felt so cosmopolitan in my little room. Coming from tiny Rock Creek, population 750, this was big city living, and I absolutely loved it. I would take the rapid downtown every day, weather permitting, and I would walk to my college. I had arrived. I had everything I wanted and yet I wanted to die. I was consumed with misery and contemplated suicide daily. I related closely to the character James Dean played in the movie Rebel Without a Cause. Unlike the fictional character of Jim Stark, I had experienced some very real and devastating situations in my life that drove my sense of desperation and angst.

That evening’s dilemma was simple: stay home and ruminate on whether I should go in search of a buzz to stop the crazy thoughts that plagued me—or join Bonnie at the AA meeting. Bonnie had been sober for three years at the time and she had sweetened the deal by telling me that her boyfriend, Brett, would be there and he was bringing his friend Ken. The guys were dedicated motorcycle riders and they had offered to take us for a cruise after the meeting.

The real difficult part for me was trying to decide whether I qualified as a member of AA. Yes, I had been smoking pot almost every day for years. Yes, I took speed constantly and I was holding onto a stash of it just in case. Yes, I was a binge drinker and every time I drank I got drunk and wanted more. Yes, I blacked out and did everything I said I would never do. But did I qualify for AA? Could you be a member if you also did a lot of drugs? Were pot and speed even drugs?

While going to an AA meeting with Bonnie was exactly what I needed to do to lengthen my sobriety, the real enticement was the promise of a ride on Ken’s motorcycle. So I pulled on some jeans, dug out my old  leather jacket, brushed on mascara, headed out to my rusty red car and drove off to the church where the Berea Saturday meeting was.

I have no memory of the meeting. I believe there were the usual readings, some announcements and a speaker telling their story. What I vividly remember are the events after the meeting: being introduced to Ken, a rather good-looking young man who I developed an instant attraction to. There was a brief discussion about where we would ride. They decided The Flats was our destination. They made Bonnie and I wear helmets, which was a good thing since my long, curly hair would have been a tangled mess. We got on the bikes and took off.

The Flats was quite a distance from where we began. We started out on congested streets and then we were on the freeway. I had ridden on the backs of motorcycles before with guys who had been trying to impress or terrify me, but this was different. The guys kept to the speed limit, but it felt like we were flying. The air swirling around us was still warm as the day eased into night. It felt so free. These friends I rode with were clear-thinking and acting. I wanted what they had. I breathed deeply, relaxed, allowed myself to take in this experience and to think about what it meant to be an alcoholic. I liked this. If this was what it meant to be a sober alcoholic, then by gum I would be one!

I can’t say that the urge to drink left me at that point. It would be five months later before I realized that miracle, but I wanted this life I was seeing right now. I wanted to feel free, to know I was in command of my faculties, to have the desire to end my life lifted, to be unencumbered by the constant pursuit of a drink or a drug or recovering from their effects.

As we continued our journey, we traveled on an expanse of elevated road. For quite a distance we rode above the streets of the city. It made me feel like we were the only people in the world, and we owned it. We moved along at a good clip under the clear night sky; above us the moon was a perfect circle. I felt that God him/herself was smiling down on us, encouraging our youthful pursuits.

Later, we hit downtown streets and the guys glided our bikes gracefully down the hill into The Flats. We came to a stop in front of some establishment or other and Bonnie and I looked like we were in a shampoo commercial as we eased the helmets off and flung our hair around. We walked for a bit, always keeping the bikes in view, and decided against going in anywhere. Why tempt it? We were sober and we planned on staying that way.

After a bit, we got back on the bikes and headed back to Berea and we were all too soon back at our cars. I did not want the magical night to end but end it did because that was the right thing. A long hug, a short kiss and I was back in my car headed home, able to chalk up another day sober.

I now have 33 years of sobriety. So much has happened in the intervening years. Those folks I rented that “classy” little apartment from both died alcoholic deaths, leaving behind five kids to be raised by grandparents or to flounder in the foster care system. I lost track of Bonnie, Brett and Ken as I began to attend more and more AA meetings on my side of town. I wonder where they are now and how they’re doing. I pray for them and will forever remain grateful for that magical ride on the freeway under the moon that night that put me on my path to sobriety.